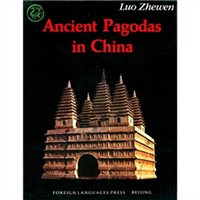 《中国古塔：英文》简介：
A s an architedural form， the pagoda first appeared in India. Arriving in China along with the spread of Buddhism， this speaal type of structure soon began to take on Chinese characterishcs in its form and use， and integrate itself with China’s own building style， making it a unique architectural form in anaent Chinese avilizafion.The author， Luo Zhewen， is a prominent speaalist in anaent Chinese architecture. The result of his arduous study and field research， this book gives a detailed and illusfrated introduction to the development， structure， uses and features of China’s anaent pagodas， as well as more than 200 typical examples throughout the country. Academic-yet informative and interesting-this book will serve well as a reference for speaalists， researchers and fans of anaent architect-ure.

《中国古塔：英文》作者简介：
Luo Zhewen， a native of Yibin of Sichuan Province， was born in 1924. Admitted in1940 to the China Construction Soaety， China’s only academic organization engaged in the research of ancient architecture at the time， he sfudied under Liang Sicheng and Liu Dun zhen， the late celebrated architeds. In 1948，he finished his postgraduate studies at China Architecture Research Institute. From 1950， heserved， successively， as secretary and head of the Cultural Relics Section， director of the Research Office of Cultural Relics Archives and In formation， and director of the China Research Institute of Cultural Relics of Cultural Relics Bureau under the Ministry of Culture， and the State Bureau of Cultural Relics. He is now head of the Group of Ancient Architecture Specialists， and senior engineer at the State Bureau of Cultural Relics; vice-president of the standing committee of the China Cultural Relics Society， and vice-president of the China Great Wall Sociefy. He was a member of the 6th through8th National Committee of the Chinese People’sPolitical Consultative Conference.Long engaged in research of cultural relics and ancient architecture， as well as their protedion and management， he has been named as anational speciafist of cult’ural relics and anaentarchitecture with outstanding achievements. His works include Hrstory of the C，reat Wall， The Creat Wall， A Brief History of Ancient Architecture in China and China’s Imperial Tombs and Mausoleums.